Young people are the future of politics – or at least, they should be.

In the US, people aged 39 and younger – millennials and Generation Z – now make up more than a third of eligible voters. They’re considered more ethnically diverse, and liberal, than older generations, and experts say they could make a significant impact on this year’s elections.

Except younger voters, as a cohort, consistently turn out in lower numbers than older generations.

The Democratic Party is currently electing its nominee to take on President Donald Trump in November’s election, and one candidate, Senator Bernie Sanders, has argued he alone can mobilise young and new voters.

The 78-year-old is uniquely popular with the young – according to some polls, he’s the first choice of about 50% of Democratic primary voters aged 18-38.

On Super Tuesday, surveys suggest Mr Sanders won the youth vote in every single state – yet there wasn’t a spike in overall youth turnout, and Mr Sanders still lost out to former Vice-President Joe Biden, 77, who won 10 out of 14 states.

Mr Sanders has admitted that it was “not easy” mobilising the youth vote. “Have we been as successful as I would hope in bringing young people in? The answer is no.”

John Della Volpe, the director of polling at Harvard Kennedy School, has led surveys on American youth voters since 2000. He says that based on exit polling data, “there is credible evidence to suggest that the youth vote is flat to down in most states… young people are just not as enthusiastic as many of us expected them to be”.

So why aren’t more young people voting in the Democratic primaries – and what sort of an impact would this have on November’s presidential elections?

The honest answer is – it’s complicated, and there are several different factors involved.

1. It’s not always easy to vote – even when you want to

Surveys suggest young people are interested in politics – one Harvard poll last year found that 43% of 18-29 year olds said they were likely to vote in their party’s primary.

But actual turnout appears to have been far lower than that – analysis of exit polls from Tufts University suggests youth turnout in the Super Tuesday states ranged from 5% to 19%.

And even in the states where the overall number of young voters increased, they were dwarfed by a larger increase from older voters.

One reason? The process of casting your ballot can be complicated – especially for first time voters.

“There’s no candidate that magically makes voters show up at the polls,” says Abby Kiesa, director of impact at CIRCLE, a research organisation at Tufts university focused on youth engagement.

“A young person doesn’t turn 18 and realise ‘oh, my voting location is here’… too many people assume that just because we have the internet, everything is obvious, and it’s not.”

Many young people have complained about accidentally missing the registration deadline – and for students living out of their home states, getting an absentee ballot can be even more complicated.

Benjamin Clardy, 21, is currently studying in Italy – and found that postal ballot requirements meant he had to “print out a very specific kind of envelope”. The problem? He didn’t have the right printer, and had to track down a specialist printer in Venice.

“Most of us don’t have printers at home anymore,” she says. “When you’re living a busy life, figuring out who to vote for, and trying to remember and navigate different voting processes for a county you don’t live in, it can be tough.”

And the system can be unreliable. Lina Tate, 20, registered for an absentee ballot in mid-February – but did not receive her ballot until 6 March – three days after Super Tuesday.

She has since sent off her ballot, but felt “very annoyed” at the process. “As a younger voter, I know that older generations already think we don’t turn out to vote… [but] this is an important process for me.”

The three all managed to cast their votes eventually – but the system makes it harder for young voters who aren’t extremely well-organised or motivated.

Meanwhile, many voters in Texas and California faced a physical challenge – as long lines meant they had to wait several hours to vote.

The line at TSU, Houston, for the Texas Democratic primary, 30 min after the polls closed. The line continues inside the building. From the front doors to the voting booth took me over 2 hours in line — and nobody in this picture has made it that far yet. 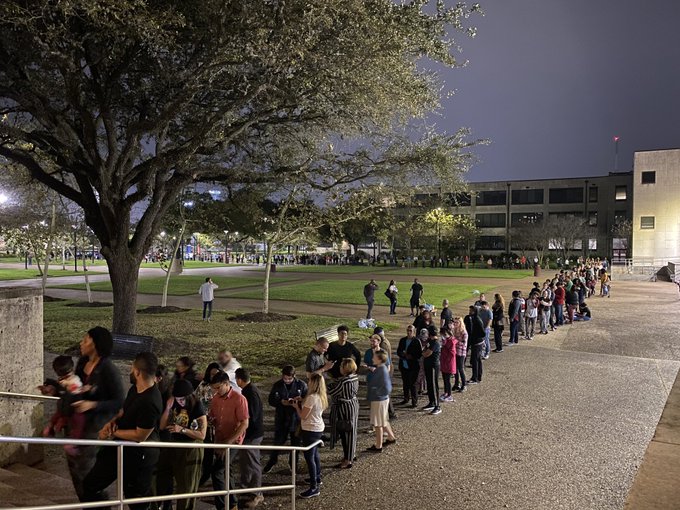 3,829 people are talking about this
Report

Rights groups in Texas said wait times were particularly long in student neighbourhoods – and one 19-year-old told the Guardian he queued for an hour and a half, but had to leave to go to class. He returned shortly after 19:00, when polls closed, and waited for two hours, but was then told he was no longer allowed to vote.

2. Quite a lot of young people feel disillusioned

“Young Americans vote when they can see a tangible difference that their participation can make,” he says, arguing that this motivated record turnout levels in the 2018 mid-term elections.

In general however, many young people can feel disengaged from politics. A Harvard survey found that only 16% of those aged 18 to 29 agreed with the statement that “elected officials who are part of the Baby Boomer generation care about people like me.”

Within the Democratic party, many young voters feel that the party’s establishment has not been listening to them.

Mitchell Allen, 18, voted for Bernie Sanders, but says: “A lot of kids my age feel the system works against them – there’s no point voting because the establishment will win.”

Ms Wells, who also voted for Mr Sanders, argues “it’s difficult to mobilise people in a system that’s continuously telling them their political goals, and movements they want to see happening, are not viable.”

Meanwhile, Mr Clardy supported Pete Buttigieg – but also found the last-minute rallying behind Joe Biden “sad… it seemed like the Democratic Party was not acknowledging that there are problems.”

3. A lot of high school students get less information about politics

Several young voters say they found it easier to engage in politics once they went to university.

“Families don’t talk about it so kids don’t, and you don’t want to bring it up and get in a fight with your friends.” She found much more of a “political atmosphere” once she went to university.

Ethan Somers, 20, tried to encourage his friends to register to vote when he was in high school in Lakewood, Colorado, but said many were likely to respond: “Do I really need to?”

“A lot of people at my community college came from low socio-economic backgrounds, and faced real hardship,” Mr Somers says.

“In this small town we were in, they saw politics as a thing that happened in Washington, and it didn’t feel like the things they would vote on would make a difference to their lives. They felt politics had failed them in a way that made it too frustrating to deal with.”

A lot of the divide comes down to the fact that political campaigns rely on visiting college campuses – which means “young people who do not have college experience are much less likely to be contacted”, says Ms Kiesa from CIRCLE.

It is problematic “when systemic inequity in [political] access starts so early”, she adds.

4. It’s also down to the politicians in the race

A lot of people have blamed young people for not voting – or say Bernie Sanders failed to mobilise them – but experts say the other political campaigns played a part too.

“Mr Sanders is not responsible for turning out all young people,” says Mr Della Volpe. “The other reason that youth turnout was low is because other candidates did not make them a strategic focus of their campaigns.”

What the other candidates forgot, he argues, is that 50% of young Democratic voters did not say they supported Mr Sanders – so he believes they lost a “huge opportunity” to attract younger voters.

And the fact there were so many candidates competing for much of the race could have put off some younger voters.

“The field was so convoluted, I think some young people stopped trying to figure out who would be the best candidate, and decided ‘I’ll just vote in the general election'” says Mr Somers.

5. Finally – things could still be very different in November

Primary elections are complicated – and experts disagree on the best way to compare youth turnout.

Harvard pollsters compared 2020 turnout with the most recent Democratic primaries in 2016, where Bernie Sanders also ran. Meanwhile, experts at CIRCLE say youth turnout in 2020 actually increased compared to 2012 – which is the last time only one party (the Republicans) had a competitive primary.

What they do agree on is that young people have already made a significant impact on politics – and that things can be very different in general elections.

In part, this was because “in some ways the 2018 vote was a referendum on Trump’s policies,” says Mr Della Volpe, whereas “Trump has not been a major factor in the 2020 primary – it’s essentially a referendum on Bernie Sanders.”

Meanwhile, Ms Kiesa says that several events in 2018, including the Parkland shooting, mobilised young people to campaign on issues including gun safety and voter registration.

Young people “really do have the ability to create change”, she adds. “We should be very careful not to draw any conclusions on youth turnout in the general election based on the primary.”

In the middle of a coronavirus outbreak, people of Seattle adjust to changes

In the middle of a coronavirus outbreak, people of Seattle adjust to changes

You may have missed